The increase in cases of crime, violence and vandalism has recently been occurring with greater intensity, particularly in major urban areas and its action perimeters. Consequently, the public space has been set up as a recurrent scenario in this type of illegal activities. The transports, either private or public, are also part of this space where the majority of the population spends a significant part of their time.

The growing trend of these occurrences inside the transports, leads to a growth of an insecurity feeling in the people that uses the public transports network. For the transport companies, the most direct consequence has been the increase of the number of hours that the fleet cars must be immobilized to make the proper cleaning and repairs, due to damage caused mostly by acts of vandalism. These forced stops, have costs and consequences in the quality of service provided to customers.

The video surveillance systems integrated with other prevention methods, have proven to be an important tool in the greater objective of reducing the occurrence of such crisis situations. As well as acting as a demotivating factor of such practices, these systems take a leading role in identifying those involved. As a result of previous assumptions, the video surveillance contributes actively to increase the safety of users, which in itself is already an important factor in customer loyalty and capture of new passengers.

The technology breakthroughs in the bandwidths provided by the mobile radio networks, makes it possible the transfer of all data, whether images, audio records or telemetry information, from a vehicle in motion to a control center, which can view, monitor and process all this information in real-time.

The video surveillance system developed in partnership with PT Inovação and TMN, wants to provide public transport with the capability of locally recording and transmission of images, audio and telemetry information to a surveillance central, using the mobile radio network.

The system consists of 3 fundamental components: On Board Unit (OBU), Central Application (AC) and a Backoffice Application (AB).

After its activation, the OBU begins the process of continuous recording of images and sound on the inside of the vehicle. By pressing a panic button within reach of the driver inside the vehicle, the OBU sends a notification of panic to the AC that in turn informs all the AB’s connected, regarding the identification of the alarmed OBU. The latter begins to receive and record the images obtained from inside the car in alarm. This interconnection is archived with the radio network (GSM / GPRS / UMTS / HSDPA) of the operator. Apart from viewing the images, AB can still do a search by date / time / GPS position on the database of images stored in the OBU as well as on all the information now stored locally by the application AB. Apart from the images, the audio recordings corresponding to the images time period, are also returned. 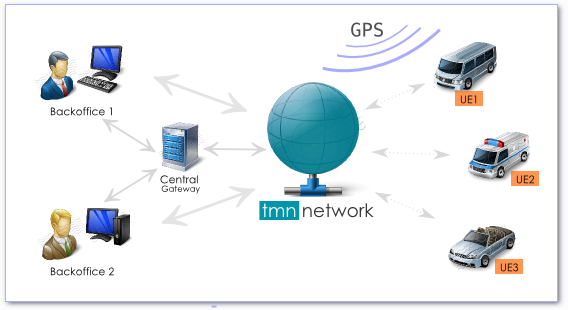 This system may also permit interconnection with georeferenced information systems as well as with other fleet management systems.

The solution developed under this project, enhance the market for mobile video surveillance, presenting an innovative, and nationally pioneer solution. The mobile operators can offer his customers a bundle that integrates a data plafond with the video surveillance systems solution. The integration of this system with other fleet management systems can benefit the market position of this product in other contexts that requires additional focus on telemetry components. Apart from the communications component, the system also stores all the information locally in the OBU. In any time, when the conditions become favorable for transmission, it is possible to access all the information with the speed and security desirable.